Maureen Elizabeth Worrell our Ambassador, shares some of her story: 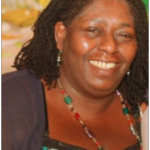 One of my most profound memories of growing up in a household dominated by domestic violence and abuse is the constant fear of waiting for the next explosive episode. I felt I was permanently on edge and filled with an almost indescribable anxiety that originates from the pit of your stomach.

It was always bad enough having to cover my ears to shut out the noise of the shouting, crying, cussing, threats of violence and sounds of flesh being struck, much less to be frozen in fear when the silence itself was deafening. To me, the silence was unbearable as that could indicate a lull in the physical violence or it meant her pain was so bad that she couldn’t even make a sound – until the next beating of course.

As a small child, witnessing it day after day was horrendous and impacted me to a point whereby I am not sure I could ever really describe just how much it really affected me then and now. Growing up in circumstances where domestic violence affected all aspects of my life meant that I grew without an identity of who I was meant to be. The long term effects impacted greatly on my self-confidence, my self-esteem and my trust in myself and others. It affected my choice of personal one-to-one relationships and communications and interactions with people in general.

At the time, I of course did not realise the effect on me in terms of Mental Health – in hindsight I would have easily been diagnosed with Depression and Suicidal Tendencies from the age of four or five years of age onwards.

Caught up in that kind of environment, it is inevitable that as a small child, you will absorb and take in all that negativity and fearfulness. From a very early age my health was affected in a very bad way – suppressed fear can and does manifest in various ways – migraines, stomach pains, joint pains, nerve pains, depression and dark thoughts of wanting to escape the torturous chaos of noise and upheaval.

The tangible mental health effects are not referred to or spoken of enough – adults do not want to comprehend or even acknowledge that very small children, in particular, can or do have mental health issues from the onset of witnessing domestic violence and abuse. This is why the works and awareness campaigns implemented by Free Your Mind is so vital, unique and necessary. The issues Free Your Mind tackles head on are the same issues we as children felt or feel even as adults, because we exist without having the fundamental resources or know how of how to express what we feel and why. As a Free Your Mind Ambassador, I can only state that I am committed to continue to speaking out in order to keep raising awareness and to also keep on breaking the insidious silence that prevents us all from removing the stigma of shame and embarrassment from the very essence of what is Mental Health and its effects on individuals – young and old alike. Our children deserve better and its up to each of us to step forward boldly to illustrate that someone, somewhere, fully understands what they are going through, how they feel and ultimately to prevent the potential of many years of silent suffering and struggles.